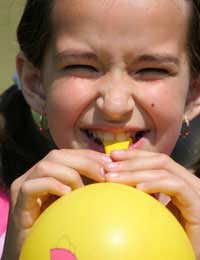 No children’s party is complete without the introduction of some fun party games to get them mixing and having a good time. Some of the most popular games throughout the years have been games that involve balloons and preferably lots of physical effort to tire them out. Some of the most popular balloon games to get your children’s party off with a bang (no pun intended) are listed below.

The beauty of balloon games is that they can be played with varying numbers of kids. The rules are often completely flexible and can be adapted to suit the particular occasion you’re in. Some of the best are team games where all the children at the party have to work together or work together in teams against each other.

One of the most popular is the balloon relay race. For this all you need to do is split the children into two teams of equal number and get them to stand in two lines parallel to each other. Give each of the children at the front of the line a balloon. The object of the game is to pass the balloon to the very back of the line the quickest. There are numerous variations on how to do this. One way is to have the first child pass it through their legs the second over their head and then so on right to the end. When the balloon reaches the back first this team is the winner.

Another variation on this particular balloon race is that the children aren’t allowed to touch the balloon with their hands. They start off with the balloon either tucked under their chin, or held between their knees. They must then pass the balloon to the next person without using their hands to move it. This can prove to be slightly too tricky for some children, but the same rules apply where you must get the balloon to the back of the line before the other team.

Yet another variation on the balloon relay game is where the child at the beginning is given the balloon and they must pass it to the person behind them. When they successfully do so they then run to the back of the line. The aim is still the same where everyone has been passed the balloon. Generally if the balloon is dropped in any of these games then the person can just pick it up and start again.

Many balloon games at children’s parties involve making as much noise as possible. Some of the most popular balloon games require the children to pop the balloons against timers or against other teams. One of the quickest balloon pops around is where you fill each of the balloons with pieces of paper that have prizes written on them. You then throw all the balloons into the centre of the floor and let the children pop them as fast as they can. Inside they’ll each receive certain prizes or ‘try again’ etc and they’ll have the fun of popping the balloons.

Another balloon pop game is where you fill up two large sacks with blown up balloons and split the children into two teams. Each team must race to the sack in front of their team and pick out a balloon and burst it, running back to their team and tagging the next person to go and do the same. The team that burst all the balloons in their sacks in the quickest time are declared the winners.

The fun thing about balloons is that they are very versatile when it comes to games. Some of the most fun games can be developed from the most simple ideas. Simply getting children to keep their balloon in the air the longest can provide hours of fun and contentment.

Another great game is to put a ball bearing or a marble into lots of balloons and then split the children into teams. Give each team the same number of balloons as team members plus one. Then throw all the balloons into the air and whichever team keeps all their balloons in the air wins a prize.

Another balancing balloon game is where you place 15 balloons in the centre of the floor and each child has two minutes to pick up as many balloons as possible without letting any of them drop. You can stick the balloons up your shirt, down your trousers or anywhere you can hold them, so long as you don’t drop any. The child who has been able to balance the most number of balloons is the winner.

The best balloon games are often made up on the spot and have their rules altered to suit the children playing or the environment they’re played in. The trick with them is to let your imagination run wild. You can draw on balloons, stick them to walls, put items inside them, use them for races and more. The goal is to have as much fun as possible and the children playing will have fun too.