Home > Party Games > Truth or Dare for all Ages 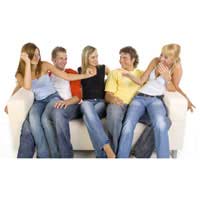 The party game of Truth or Dare has long been a popular pastime of teenagers as well as adults. The theme of the game can be adapted dependent on the age range of the players involved. Truth or Dare is generally played in small groups of four or more people though it can be played with as little as just two players. Generally however the more players, the more amusing the overall game.

Truth or Dare is simple to play and utilises the premise of telling the truth or taking dares, as the name suggests. Regardless of the playing audience the overall rules remain the same. Players choose who begins and that person asks someone else in the group ‘truth or dare?’ The respondent must choose between these two things and either tell the truth to whatever question follows or take on the dare as suggested by the player asking. Once completed play moves onto the next person chosen, or in the circle of play.

Teenagers playing truth or dare will generally stick to silly dares, such as pretend you’re a cat, do your best Britney Spears impersonation or other things meant to embarrass the party doing them. Truth questions will generally relate to other embarrassing things such as who they like, who they’ve kissed and so on. Truth or Dare has long been a fun game for teenagers and they will also combine it with the game of spin the bottle so that who has to answer the truth or dare is more random.

Adults playing truth or dare will generally play whilst drinking and perhaps even tie the drinking in with the game itself, rating dares on a scale and getting the person being dared to drink dependent on overall judgement. The dares and truths in an adult Truth or Dare game will almost always lead to sex questions and sex based dares. This is usually par for the course and can be fun with the right group of close knit friends.

Scoring in Truth or Dare

Scoring in Truth or Dare doesn’t really exist. The fun of the game comes from laughing at or with friends and learning secrets about one another. For this reason Truth or Dare is usually best played amongst people you trust and those you don’t mind revealing your personality and inner secrets to.

An example of this rule variation sees the person being told the dare partnered up with another player and sent off to a closet or other room to commence the dare together. Usually the dare will involve some sort of kissing or touching and in extreme adult variations sexual play. The two doing the dare are left for seven minutes and on returning the partner to the dare area, they must let the group know whether the person doing the dare had done it to completion. No one in the overall group will know if they are telling the truth or not, they may have just spoken for seven minutes, though in the name of sportsmanship, will generally do the dare