Home > Board Games > All About Cribbage 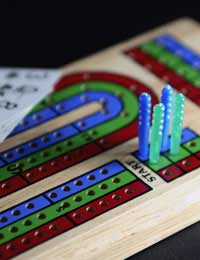 The Background of Cribbage

Cribbage is a card game for two players where you aim to form combinations of cards to score points and play the cards you have in a particular to gain points.

What makes cribbage stand out from other card games is that it utilises a cribbage board to keep score and has its own unique scoring system.

It’s a game that has been in existence since the early 17th century and not much has changed since it’s inception as a popular parlour game. The main aim of the game is to score 121 points before your opposing player can. There are a variety of ways to do this.

Playing the Game of Cribbage

To play cribbage you have to use a standard 52 deck of playing cards. You deal six cards to each player with each player discarding two cards face down to form ‘the crib’ This will be used at a later stage by the dealer.

The player who isn’t the dealer will then cut the deck and the exposes the top card which is call ed the starter card. It is placed on top of the deck facing upwards. If it happens to be a Jack, the dealer is awarded two points.

When the game actually begins, each player has to lay one card alternately, saying the cumulative value of the cards laid. The total laid must not be more than 31, so a player who can’t lay a card without surpassing 31 must pass their turn by saying ‘go’. This means that the other player can continue to lay as many cards as they can without going past 31 – the player who lays a card last without going past the magical 31 is awarded one point ‘for the go’. Then, the cumulative number is wiped clear and the players play the remainder of their cards.

One of the most complicated areas of cribbage for newcomers to the game is the scoring. During the game, (including play and the show) you can count the card value of each card. When you’re scoring during play, there are a few ways of doing so:

You can core in the show by getting two points for each combination of cards that are equal to 15. You can use individual cards in more than one 15.

The Strategy of Cribbage

Most cribbage dealers know that there are certain cards and combinations that are beneficial to having a good hand. The non-dealing player usually tries to hold onto those cards and the dealer will also try to keep any good scoring combinations together.

It’s usually better overall to keep pairs, combinations and runs that are equal to 15 in your hand or in the crib. There are a variety of other useful cards. Fives are good cards as they often help form 15, also a five in the crib guarantees you will get at least two points. Sevens and Aces are likely to combine to 15 as well as threes, sixes and nines.

If you’re playing in a two player game (which is the most common way of doing so), some simple tactics can be employed to help you win. Always try to avoid leading with a five. It’s very common for your opponent to have a ten or a face card so they’ll be able to make 15 and rack up two points.

Also, you can play a four to try and ensure your opponent can’t make 15 on their next card played. In general terms, try playing a card from a pair. If an opponent then goes on to complete the pair for two points, hopefully the initial player can go on and complete a royal pair for six. If you keep hold of your small cards, this will increase your chances of being able to play the last card for one point or getting 31 for two points.

Reversi
Share Your Story, Join the Discussion or Seek Advice..
A fun and easy way to learn the basics of playing Cribbage and scoring hands is to play Kings Cribbage. KC is a tile board game version of Traditional Cribbage, that leads into every Crib hand scenario. Each hand played on the board stays open (unlike the card game where each round the hands are stacked). Not only can you see all the hands that have been played on the board, but you have to play off them with the tiles from your rack to make the most points. Like the card game, a good balance of luck, skill, and strategy, an exciting, and a fun way to learn/play a great game.
KCUK - 29-Mar-11 @ 11:01 AM
Title:
(never shown)
Firstname:
(never shown)
Surname:
(never shown)
Email:
(never shown)
Nickname:
(shown)
Comment:
Validate: