Home > Board Games > All About The Game of Ludo 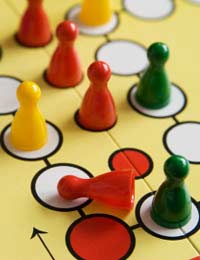 Ludo is all about the game, quite literally, the name Ludo means 'game' in Latin. Ludo was devised around the late 1800's and is still a popular board game today. It's a great game because it is easy to pick up and play. The rules are so simple that the age range of the game is 4+ (though 4 may be slightly too young to 'get' the overall strategy). Ludo is a great family game, from beginner players to those who like a little more strategy mixed with chance play.

Ludo is played on a board with each corner showing a different coloured play area (traditionally Blue, Red, Yellow and Green). The overall objective of the game is to move around the board play area with all pieces until they are in the home area of the game board. The skill in Ludo is in knowing what pieces to move and when. Players start with one playing piece on the board and can add new pieces to the playing area on the roll of a 6 on the standard six sided die. The player can choose to keep one piece in play and move it the six squares on the roll of a six (thus getting it closer to the finish), or add a new piece into play.

The Objectives of Ludo

As the overall objective is to get all your playing pieces into the home stretch, eventually all pieces will have to enter the playing arena and as they can only do so on the roll of a six and no other number, a good strategy is actually to get as many pieces on the board as quickly as possible.

The only problem here is that if pieces land on a square of the same colour, you need to miss a turn and the more pieces you have in play, the more chance there is of this occurring. Also if you are topped by another player's piece (they land on a square occupied by one of your pieces) it is removed from play and must re-enter the game on the throw of a 6 as it did initially.

The first person to get all four of their playing pieces to the home area is the winner. Pieces can only get to the final square with a roll equivalent to the number of jumps it will take to get there (for example if the last square is 5 spaces away, the player must roll a 5 to get there).

There are some variations you can add to play to change the overall flow of the game. Things can be sped up by changing the 'must roll a six to get piece in play' rule. You can change this to another number or a multitude of numbers. For example, a player can enter a new piece on the roll of a 3 and 6.

You can also use the block variation in which you can 'king' your own pieces when landing on a square that already holds one of your pieces. With this rule you leave both pieces on the square doubled up and opposing colours are unable to pass you on that line of play.

Another way of keeping the flow of Ludo going is to allow players to simply move a piece that would otherwise be a double up to enter the next vacant space. This keeps the pieces in play, rather than the player losing a whole turn.