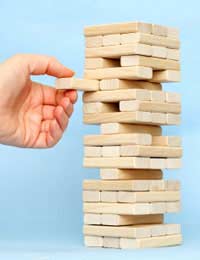 Playing games in a group can often be more fun than playing solitary. The interaction between group members can add an extra level of enjoyment to any game and even when the game requires a lot of concentration, there's still plenty of fun to be had.

Most games require some level of concentration, but there are particular games that really need each player to focus on the gameplay to even get close to winning.

Many concentration games have integral physical aspects to them. Whether it's a game that requires you to expend a large amount of energy or simply one that is played at a table, there are plenty of games that involve some kind of movement. Some of the most common games to play in groups that require concentration and have physical aspects to them are:

There are a number of great concentration games that you can arrange to play in groups to help break the ice. Many require people to be willing participants and have no place for shyness. These can be used in a party environment when you're mingling people together for the first time.

Many group concentration games require extended gameplay sessions over weeks or even months. Games such as role-playing titles, poker, war games or more require players to engage with each other over a long period of time. With such lengthy game play it's essential that you maintain focus and concentration throughout not only the session, but the length of play overall.
Next Page