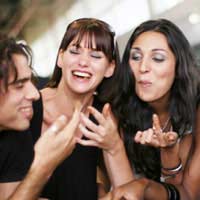 What Is Table-Top Role-Playing?

Table-top role-playing games have actually been around since the late 1970's and despite the rise of the computer based RPG, table-top role-playing is still big business today. Many genre's are covered, including science-fiction, fantasy, horror, cyberpunk, history and more.

Table-top role-playing generally needs players numbering 2 or more, though there are also some solo adventures available should you happen to be in that position. You will need your imagination, pen, paper, dice and some rules books for whatever game you've opted to try.

What You Need For Table-Top Role-Playing

As a general rule when taking part in table top gaming, one player will serve as the Games Master (GM) and this person makes up the base of the adventure the other players take part in. Another alternative is to have the GM read a set adventure from the chosen game. The GM essentially runs the story of the game, but the beauty of table top RPG is that you are not constrained in what you do like you are in other RPG mediums (computer / video games for example). It is up to the player as to what they do within the game world, they are only restricted by imagination.

Getting Started With Table-Top Role-Playing

As a player in a table-top RPG you will need a character. A character is the alter-ego you will play in the game world and is "rolled up" using the game rules, dice and your own choosing. Game rules differ dependent on system, but you will generally roll a series of dice to gain statistics that will give you the bare bones of the character you will be in the game world (some games use allocation of points).

You will also choose skills and equipment based on the game rules. So for example if you are playing a spy character in a spy game, your skills will reflect this. You may have skills such as Driving (for car chases), Surveillance, Gun Use etc. You will name the character, fill in your sheet with all the information and once everyone is ready the GM sets out the story or "scenario" and it's then up to the players to decide what to do.

How To Play Table-Top Role-Playing

You don't physically do anything in table-top role-playing, you sit around with a group of friends, consume copious amounts of snacks and drinks and let your imagination do all the exercise.

The joy of table top-role-playing is in the camaraderie, the adventure and team work the gamers take part in. Despite some bad press in the late 80's table-top role-playing is not only safe, it can also be a good tool for learning many real life skills, particularly for younger gamers.

Given the rules of most RPG's are based around tables and numbers, more than one young teen has started table-top role-playing with lousy math skills, only to emerge months later better for their experience.

Where to Buy Role-Playing Games

Table-top role-playing games can be bought online or in some local hobby stores. Older games can generally be found on online auction sites. If there is a particular genre you're fond of, there is probably a role-playing title that is set in that realm. Even popular television series sometimes get their own table-top RPG's made based on them. Some of the more popular RPG titles through the years include: Dungeons & Dragons, GURPS, Vampire the Masquerade, Traveller and Call of Cthulhu. There are quite literally hundreds of different table-top RPG's and dozens of genres available.

Table-top role-playing is a fun hobby that can feature storylines that last one night gaming session to campaigns that go on for years. It's not difficult to get into, it's fairly inexpensive and is a fun group activity.