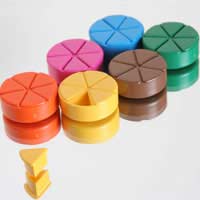 Trivial Pursuit is a popular board game that usually inspires either great love or hated in most people who play it. From it’s first outing in 1982 the game has been released in many varied editions and in numerous countries throughout the world. Seen by some as one of the best board games around and others as tedious and boring, Trivial Pursuit is always sure to garnish some kind of response when it’s brought out at social events.

What is Trivial Pursuit?

The premise of Trivial Pursuit is very simple. In order to win the game, you must succeed in answering as many questions correctly as possible and in doing so, obtain ‘wedges’ to fill out your own playing piece which is shaped like a pizza pie. As you move around the board, you’ll be asked questions from different categories dependent on which coloured space you land on in the game. In order to determine how many spaces you move around the board, you must roll a dice. A standard Trivial Pursuit game comes complete with board, question sets, dice, playing pieces and instructions.

Starting and Playing the Game

At the beginning of Trivial Pursuit, each player must choose a coloured piece to represent them and each person rolls the dice to see who gets the highest number. Whoever does get to go first and all players place their pieces in the centre of the board. The board looks like a wheel with spokes and players can travel in any direction on the board they wish, but all must start in the middle and finish in the middle.

Initially each player must move down one of the ‘spokes’ and out onto the ring around the board. This is where most of the play takes place and the categories here are marked by different colours. There are also 12 roll again spaces that allows any player who lands on it to have another go at the dice. The best spots to land on around the board are known as ‘headquarters’. There are six headquarters on the board, at the end of the spokes. These are where you can answer a question and obtain a coloured piece that is representative of that space. You can only add pieces to your pizza pie when you land on these spots. The categories in the original version of Trivial Pursuit are as follows:

When you land on a coloured square you must answer a question correctly. The question will be asked by another player and will be a question that appears on the card and is suited to the colour and topic you land on. If you answer correctly you can roll the dice again and this can continue as long as you keep answering the questions correctly. If you don’t, then your turn has come to an end and the player to your left goes next.

Winning the Game of Trivial Pursuits

Each player takes their turn and attempts to win all the wedges to fill in their playing piece. At this point, they then try to move up one of the spokes towards the centre of the board where they initially started the game. In order to actually win the game, you must roll the exact number of moves that takes you into the centre of the board. If you over shoot then you have to answer whatever question corresponds to the colour you land on. You must keep trying until you land exactly on the centre space. At this point all the other players may decide which category of question to ask you. If you get it right you are the winner, if not you must roll again and continue on by leaving the centre and attempting to get back there again on your next turn.

There are numerous varieties of Trivial Pursuit available, from electronic versions to a multitude of differing question sets. The great thing is that any set of cards can be used on the original board. You can buy specialist cards that focus on one subject in particular or simply alter the game to make it more accessible for younger players. This is what makes Trivial Pursuit a continually popular board game.

Scrabble
Share Your Story, Join the Discussion or Seek Advice..
I've always liked Trivial Pursuit, and the different versions all make it fresh. We play it a lot when family or friends are over (it's the best fun after a couple of drinks, we've found) and had three different board versions, although we've never bothered with the electronic version - it just takes too much time to set up. But it's a popular game for a reason, it's great fun to play and everyone ends up laughing. Well, they do in our house, anyway, but we're not very competitive!
Ursula - 4-Jul-12 @ 8:52 AM
Title:
(never shown)
Firstname:
(never shown)
Surname:
(never shown)
Email:
(never shown)
Nickname:
(shown)
Comment:
Validate: