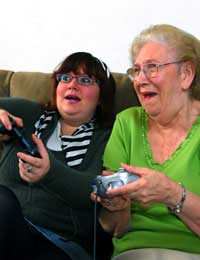 One of the most popular way for people to engage in playing games over recent years has been by using electronic games. From small beginnings with home game systems such as the Binatone and Atari and from such memorable classic games such as Pong or Space Invaders, gaming has continued to grow in popularity. The worldwide video games market now make more money in a year than Hollywood – electronic games are the future and you can start enjoying them now.

Many people enjoy video gaming through a home console such as a Nintendo Wii, Sony PS3 on Microsoft Xbox 360. These are the current ‘big three’ in the gaming world. They are known as the next-gen consoles as they have succeeded the original Xbox release, the Nintendo Gamecube and the Sony PS2. Of course there have been other home consoles over the years, most notably the N64, PS1, Sega Dreamcast and original consoles like the NES or the Sega Master System. Each of these consoles has delivered something new technologically to it’s predecessor and that is why video gaming is the most popular form of electronic gaming on the market today. As technology advances, games become more realistic, their graphics and sound improve, gameplay becomes detailed and engaging and, although some like to think otherwise, they do have a very social element to them. The accessibility of wi-fi and online play means that people who enjoy playing electronic games are able to play against other people throughout the world without even leaving their lounge.

For many people, the Wii is considered the ‘child’s’ console. It has a variety of cute looking titles available and the games often tend to focus on group play or interactivity through the use of the Wiimote. The Wiimote is the controller for the Nintendo Wii and it can be moved around to simulate movement in game . Some of the most popular titles on the Wii are games such as Wii Sports (which comes with the system) where you can play tennis, bowling and more with your Wiimote. Many non-gamers may simply disregard the Wii as one of the best consoles available, but this is a pity. The Nintendo Wii is most definitely not just for children. There are a variety of immersive adult themed titles on the Wii and it is well worth a look, being the cheapest of the next-gen consoles at present.

The PS3 is the successor to the highly popular PS2. The Playstation brand delivers what many gamers desire – a solid console with a huge catalogue of games. Sadly so far there haven’t been as many titles released for the PS3 as some would like, but the backwards compatibility (where you can play most of your PS2 and some of your PS1 games on the system) means that it is definitely worth upgrading to the PS3. With network play to allow you to play against others and to purchase new games and other media, the PS3 will continue to be one of the best selling consoles available. For those people who enjoy movies also, the Blu-ray player that is part of the PS3 also adds to it’s value.

The Xbox 360 has been one of the best success stories in gaming consoles over recent years. When Microsoft launched into the console market with the original Xbox, the main feature that sold the console was not only the online play, but the vast number of top quality games that continued to be released. With the Xbox 360, that quality has continued and there are a variety of games available to suit every style of player. Some of the more memorable game releases on the Xbox have been Halo, Mass Effect and Bioshock.

There are numerous handheld electronic games available and any TV show worth it salt will normally have an electronic version released at some point. Most commonly, shows such as Deal or No Deal, Countdown, or any of the other big quiz shows will develop an electronic portable version of their game. There are also of course handheld consoles such as the Nintendo DS or the Sony PSP, both of which have a huge catalogue of games available.