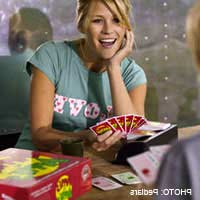 Mensa is the world's most prolific High IQ society. Members of Mensa (Mensans) are said to be in the top 2% as far as intelligence quotient goes. There is little surprise therefore that games seen as Mensa games would fall into the puzzle and brainteaser category. Games such as Zertz Abalone, Octiles, Blokus, Dvonn, Yinsh, Quoridor, Quarto, Traverse, Keesdrow, Zendo, Pentago, Deflexion, Hive, Dao and Quixo are all considered Mensa games and some have found more popularity in the general public than others.

It would seem looking at the list, that any game with an unusual or Latin sounding name falls into the category of Mensa games, though this is just coincidence as there are actually 85 games in total thus far that have been awarded the Mensa Select label.

Every year Mensa members get together and play games, but they also award games they feel are in keeping with what the Mensa society are all about. These games are awarded the ‘Mensa Select’ label, sort of like a seal of approval to state that particular game is worth playing. Needless to say, to play Mensa games it doesn’t hurt to be a bit of a forward thinker, a bit of a strategist for the most part, though some kid's games also make the cut.

As with most board games, playing Mensa games is all about fun, despite the intelligence factor, many of the games awarded the Mensa Select label over the years are playable by everyone and you don’t have to be in the top 2% of the worlds IQ to enjoy them. Some of the more accessible Mensa games are Time’s Up! and Apples to Apples.

Time’s Up! is a game where teams must collect as many celebrities as possible. They do this by working your way through cards that have famous people listed on them and you have to guess them correctly. When you do, you grab another card and keep playing. Some of the cards ask you to describe someone in just one word, or to act out what the celebrity is like. You have only 30 seconds per round and the team who has the most amount of correct guesses after three rounds is declared the winner.

Apples to Apples is another fun, fast paced Mensa game for four to ten players. Everyone is dealt 7 apple cards and someone is appointed the ‘judge’. The judge then picks a card from the deck and shows it to everyone. Everyone must play a card from their hand that they feel matches closest to the card played by the judge. The judge then chooses who is the closest match and that person wins the round. Everyone has the chance to be the judge and the categories range from events, people, places and more.

As Mensa Games are all different, scoring in them takes many different forms, from a strategic assault, through to quick thinking, reflexes or even a fair bit of luck. Mensans love to win (and to a degree are probably used to doing just that), but as with most things, it’s the fun on the journey.

The trick to scoring in many of the Mensa label titles is logic. The game Zendo has the players study the arrangement of pyramids in order to win. The game Hive sees players using tiles to try and surround the opponent’s queen bee. Pentago is all about creating a row of 5 marbles on a board that can be twisted. The secret to scoring in Yinsh is to plan well ahead and remain calm. The Mensa label game Dvonn sees players trying to control as many pieces as they can by making stacks and jumping over opponent’s pieces. Dao sees players engaging in yet more strategy, this time combined with precision of movement. As you can see Mensa games vary in game play approach, but many are about strategy and planning.