Home > Dice Games > How to Win at Bunco 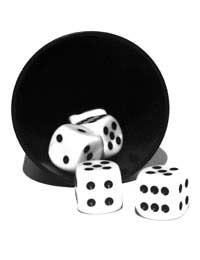 Bunco is an extremely sociable dice game that involves players split into tables of four people. Each of these tables has two teams of two playing and this is why Bunco is considered more of a party game than many other dice games. The chief aim of Bunco is to score as much as possible, which is done by rolling three dice and trying to match the number that you’re aiming to roll for that round. It’s basically a matching game and is based heavily on luck as are most dice games.

Setting up the Game

Bunco is a very straight forward game to play, yet it can provide many hours of fun as well as make teams become very competitive. Traditionally a parlour game, Bunco has been known by many different names throughout the decades, including Bunko. The term Bunco itself refers to rolling three die and matching to the particular number at the beginning of the round.

To start playing Bunco, you must put three dice, a pen and a score sheet on each table that has participants in the game. Usually there are three tables in play and each table will have a note on it that says either low, middle or high. The table that has the high card on it also has a bell which they will use throughout the game. You then must prepare 12 scorecard with four of them labelled high table (1-4), middle table (1-4) and low table (1-4). Each player must draw a score card at random when the start decide to join in and this show them where they must sit at the tables.

Getting Started in Bunco

Bunco usually consists of around six rounds. The people at the high table are considered to be in control of the game as they start and end each round by ringing the bell. In order to play, all you must do is roll the die and then see if they match the number that has been specified. This number is usually the round in which you are playing. So in round one you would be trying to roll a one etc.

Matching a dice to the particular number gains the player one point. If you are lucky enough to roll all three die with the matching number then you are immediately awarded 21 points as you have just rolled Bunco. If you ever manage to roll three identical numbers, even if they’re not matching the specified number at the beginning, you are awarded five points.

Continuing and Winning the Game

As each team are ultimately trying to obtain the best score they possibly can, the number of 21 becomes very significant in Bunco. The first team to get 21 points wins the round and play will stop here. This honour of being able to stop play, goes to the high table and when they reach 21 points all other teams must stop play also. At the lower tables, the team who have the highest score at this point wins the round. The lower table may have already reached 21 points, but they can’t stop play until the high table reaches it.

When the round is over, the points are counted up. The team that has achieved the highest number of points from the middle and low tables are promoted to the high table. The losing team on the high table move to the lower table and the round begins all over again. At the end of the round, the teams must count up all their wins and losses and the team that have the most wins overall will win the game.