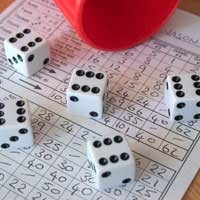 The dice game Yahtzee has been around since it's invention by a Canadian couple in 1954, though it gained true popularity from the 70s. Yahtzee is played with five standard 6-sided dice and scores are gained dependent on the number combinations on each throw. Yahtzee is an addictive and fun game for all the family.

Playing Yahtzee is simple once you get the hang of it. It can be played by a single player or in a group and involves the throwing of five 6 sided dice. The object of the game overall is to score better than your opponents over the thirteen rounds the game takes place. The name ‘Yahtzee’ itself is the highest scoring combination in the game and is called when a player throws a five of a kind, which is all five dice in play display the same number. Needless to say the Yahtzee is the most difficult combination to get and multiple Yahtzee’s throughout the game result in bonus points.

Each player gets a total of 3 throws of the dice, setting aside certain dice as they go to try and make a specific combination. Once all three rolls of the dice are complete (or one or two should the player be lucky enough to score something they need in the first or second rolls) the player must place the score in one of the empty places on the scorecard. If a player fails to roll anything he or she needs for the scorecard, they must choose a section and record a score of zero for that round.

A player may choose to play Yahtzee alone, this being the case, the overall idea of the game is to try and score the ultimate score of 375 points (the highest possible). Players may also give themselves a scoring bracket to reach to make the game simpler, for example trying to score over 340.

Scorecards in Yahtzee are split into two main sections, with thirteen sections in them both all up. A game consists of players filling in every section of the scorecard. The upper section of the Yahtzee scorecard needs to be filled in by throws that match the numbers on the dice 1 through 6. For example a player throwing three 3’s would place a score of 9 in the threes section.

The lower section is split into specific dice combinations similar to poker hands, such as 3, 4 or 5 of a kind, straights and a full house. Once all boxes are filled in, scores are tallied up and the player with the largest overall score is the winner of the game.

Yahtzee isn’t a game with a lot of variants (though different versions of the actual game have been released over time). The rules and scoring in Yahtzee remain the same regardless, as it is the staple of the game itself. Some players however do opt for their own ‘home rules’, which can consist of bonus scores for certain roll combinations, adding more dice to the mix for larger scores. All of these are common sense additions and it would be up to the group playing to adjust the rules accordingly.
Next Page