Home > Card Games > How to Avoid Becoming an Old Maid 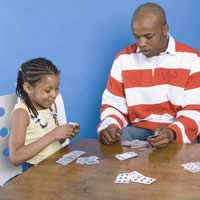 The card game of Old Maid may seem slightly familiar to those card game lovers that play the classic card game Chase the Ace. Old Maid is playable in groups of two to eight players and can either use an Old Maid deck (made especially for this game) or a regular card deck. If using a regular deck one of the Queens is removed from the deck, leaving a full deck of just 51 cards.

Playing Old Maid starts with the dealer (whoever is chosen) dealing all cards to all players until no cards remain. Players with differing numbers of cards are of no consequence in Old Maid as usually this will only be one card or so. Once all the cards are dealt, players look at their hands and remove all of the pairs they hold, placing them face up in front of themselves. Note this is pairs only. Once the removal of all pairs is done, the start player, usually the dealer, though this is generally up to the group, holds their hand out to the next player (clockwise) and they choose to take one card. The cards are not seen by the person choosing and are held facing the player whose cards they are (and can be shuffled at any time). If the card randomly chosen by the player makes a pair in their hand, they can discard this pair before offering their hand to the next player to randomly select a card and so play continues. Given one Queen was moved before play began, this means there is an odd Queen in the deck. This is the card players do not want to be stuck with as the person with this at the end of the game when all pairs are discarded is ‘The old Maid’ and therefore the loser. The fun in Old Maid is seeing you have a queen in your hand and hoping that the next player will choose this card at random to add to their own hand.

Scoring in Old Maid is simply a case of not being the player with the odd Queen or Old Maid card when the game ends. Players can play multiple hands and keep score thus.

There are a few variants of the card game Old Maid. A few variants do not remove the Queen before beginning the game, but instead adds one joker, this card becomes the old maid card that players must try and rid themselves of.